Why are we so obsessed with book reviews?

That is all you’ll ever hear an indie author talk about.

Have we got enough reviews for our book?

How many reviews are enough reviews?

Do people actually read reviews when choosing a new book?

This post is not about answering how we get reviews – if I knew that, I wouldn’t be writing this would I?*

*(You could try engaging with Goodreads advice groups or maybe employ a blog tour organiser).

Photo by Ekrulila on Pexels.com

A Good Friend of mine is a top marketing executive. She doesn’t have time to read because of her (very cute) toddler son. We have been friends for years and years, even before I started writing. She lives in the south of England now so when we actually see one another we have loads to talk about. Not usually work.

ANYWAY last year, before all this lockdown business, when we met up, I asked her for some tips on marketing my books.

She didn’t even blink, ‘GET REVIEWS.’ My friend said.

Although she added the caveat that she doesn’t work in book publishing I do value her opinion. I think she is right.

I have been thinking about nothing but reviews since I became an independent author in 2016. Slight exaggeration, I do think about other things but you get the picture.

Reading is a very individual thing.

What I like to read is not the same as what someone else would like to read. We have all read books and raved about them to our friends and been shot down with an ‘Oh I didn’t like it.’

Do not get me started on book clubs…

So why are reviews so important?

Human behaviour has a lot to do with this. Herding behaviour… (now you are all imagining livestock being rounded up aren’t you?)

Photo by Kat Jayne on Pexels.com

“Moooo… I heard Samantha Henthorn has a new book coming out later this year. Moo.”

“I heard she’s pants, her last release has only got five ratings. Moooooo.”

HERDING BEHAVIOUR IS A THING – GOOGLE IT

If my friends, the cows start moving in one direction then, as a rule of thumb all the other animals will follow. They will follow without direction. This is the same thing that happens to humans. This is why fashions and fads take hold. Rightly or wrongly, if a few people are doing something then us humans will follow.

Without direction, humans will all read the same book. Because everyone else has read it. And how do they know that? Because the book has got lots of reviews. Good or bad, if lots of people have left a review, then the book must be worth reading. Right?

A few years ago, I decided I didn’t want to be a cow anymore. I felt I was being tricked. I had been tricked, at one time, I only read what everyone else was reading. So I started reading a lot of books by independent authors. But before this…

One of the first books I read when my daughter reached the age I was allowed to properly start reading again was The Time Traveler’s Wife by Audre Niffenegger. A really famous book, I read it in 2004 before the film and everything. I was still working at the time and lent it to one of my work colleagues. This person never returned books that others had lent her, so imagine my surprise (and tetchiness) when she presented me with MY copy of The Time Traveler’s Wife and told me that I HAD to read it. (Even though I was the one who recommended it to her in the first place!) 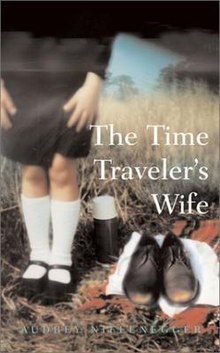 THAT IS WHAT I MEAN BY HERDING BEHAVIOUR

When I think back, two incidents involving shops convinced me of herding behaviour. When I was a teenager I had a Saturday job in Manchester Arndale. The shop I worked in sold costume jewellery and hair scrunchies (it was the 90s). One day, a big box arrived with ‘sale items’. It was a massive box of hairbands. These hairbands were dropped into another big box complete with price sticker and positioned right at the front of the shop. A couple of hours later, none of the hairbands had sold. The shop manager had a great idea. (!)

She instructed me to put my coat on (cleverly hiding my uniform) and pretend to be a customer, rooting through the box of hairbands. ‘Try a few on’ she had said. I was very embarrassed but it worked! I didn’t even have to try any of the things on my head, customers started coming over to see what I was looking at. Soon a crowd gathered and for half an afternoon in early nineties Manchester, a trend was set on the wearing of headbands.

The second shop related herding incident was another embarrassing incident for me. Even before I was diagnosed with MS, I had trouble with blurred vision – triggered by bright neon lights in my case. Not long after I had been diagnosed (and suffered a few relapses of optic neuritis) I went to Sri Lanka for a friend’s wedding. (A different friend to the one mentioned earlier). This was in 2008. One day during the holiday, my friend (who had visited Sri Lanka many times) suggested we all visit a department store. I really wish I could remember the name of this massive store that sold everything, but I can’t. We were tourists and had money to spend.

At some point, I was separated from my friends but some embroidered cushion covers had caught my eye. I thought oh I had better pay for these before I go to the next floor to look for my friends. WELL, a combination of jet-lag tiredness, panic and neon light-induced eyesight problems landed me in front of what I thought was a service point. The shop assistant will probably come back when she sees me standing here at the till. I thought…

It was probably only a few moments but by the time I realised that I was not waiting in a queue to pay… an actual queue had formed around me.

I am so embarrassed and I didn’t even know how to say sorry. I had accidentally lured a crowd of people to look at a pile of pillowcases.

Shame I can’t do that with books…

Even when I thought I was being tricked and decided not to read the ‘BOOKS THAT EVERYONE IS READING’ I still don’t know what influenced me to read the books I have over the past few years. Do any of us really choose anything for ourselves? Do we follow each other? I just know that there are more books out there than the popular ones. Although… it is good to have read a book and be able to have a conversation about it with someone else…

And My Sister, the Serial Killer by Oyinkan Braithwaite.

These books have nearly TEN THOUSAND  reviews between them on Amazon (at the time I wrote this post). If you would like to see books I have read recently, check out my Goodreads widget at the bottom of my blog page or click HERE

Thank you for joining me on my post about why I think book reviews work. If you have enjoyed reading a book recently, don’t forget to review it.

I wrote these books !

Hello, me again, honestly, I have something good to say.

The other day, I received an email from ACX (the audiobook marketplace) to say that I had received an audition from a narrator for my book Curmudgeon Avenue!

In the past few years, one of the ‘things’ that folk have been saying to me is ‘why don’t you do an audiobook?’ I was a bit ambivalent, how do I do this? I’ve got enough to do! Writing, marketing, physiotherapy, MS surviving, everything! I have spoken before about the amount of overwhelming advice on the internet about being an indie author… anyway, eventually, I got round to investigating ACX.

I found it easy to set things up, there are a few options for sorting out the money side of things – can I be completely honest, I did not expect anyone to want to take a chance on Curmudgeon Avenue (the reason I thought this was because, on the set up form, I was asked how many Twitter followers I have ‘eg. 10,000??’ !!) I thought I would have to be’ better known’.

HOWEVER, giving things a go has worked, six weeks later, I am honoured to announce that voiceover actor Lindsay McKinnon otherwise known as Theatre of the Mind Productions is going to narrate Curmudgeon Avenue – I am starting to talk about it now in anticipation of its release! Lindsay has narrated the book in exactly the same way that I imagined when I wrote it – the house is talking with a real disdain for its guests, and the voice given to Edith and Edna is hilarious! Especially the bit where Edna covers her face with her turtleneck jumper! I am so looking forward to sharing this version of Curmudgeon Avenue with everyone.

Happy reading (and soon to be listening) everyone! Samantha xx

PS, if you happen to be in the Bury area on Thursday, I will be doing an author talk at The Tottington Library (used to be Totty library) at 2pm.